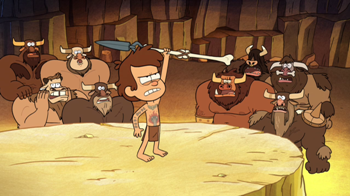 The sixth episode of Gravity Falls.

After being made fun of for his wimpiness, Dipper finds a hidden tribe of "manotaurs" in the forest, and asks them to teach him to be manly. Meanwhile, Mabel tries to teach Grunkle Stan how to be attractive to women, particularly the waitress in the local diner, Lazy Susan.