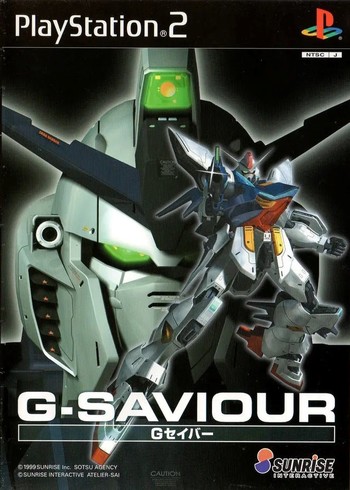 G-Saviour is a 2000 video game released in Japan as part of promotion the G-Saviour movie throughout Japan. It was developed by Atelier-Sai and published by Sunrise Interactive. It serves as the movie sequel, taking place after a conspiracy to destroy a newly developed energy formula was stopped by Illuminati fighters.

In Winter U.C. 0223, Side 8 was recognized by the CONSENT-led government as an autonomous region. However, not all the Sides were happy to hear the annoucement since most of them are under CONSENT control. Colonel Bais Bashing of the CONSENT's armed forces secretly bankrolled Project Raven to enhance its military strength.

In U.C. 0224, the Illuminati gets word of Raven's deployment and orders a mobile suit team known as Lightning Squad to investigate what's going on.

The PS2 game provides examples of: