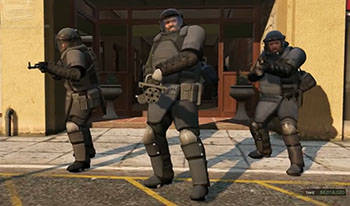 Time to face the music!
Grand Theft Auto V is widely considered by many to be the best in the series and for good reason; Rockstar went above and beyond in escalating the hijinx you'll get into both during story mode and online as you cause chaos and carnage across the state of San Andreas in pursuit of the almighty dollar.
Advertisement:

All spoilers are unmarked per wiki policy. Read only at your own risk. You Have Been Warned.