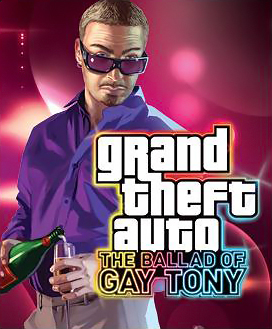 The nightclub trade is not what it used to be.
"Gay Tony will always be the king of this town. You are this town."
—Luis Fernando Lopez
Advertisement:

Grand Theft Auto: The Ballad of Gay Tony, released on 29 October 2009, is the second of the two Episodes from Liberty City expansion packs for Grand Theft Auto IV (the first being The Lost and Damned), and is the finale of the GTA IV trilogy.

The protagonist this time around is Luis Fernando Lopez, a part-time hoodlum from Northwood (Liberty City's version of Inwood) who works as a bodyguard for "Gay Tony" Prince, one of Liberty City's top club entrepreneurs with a drug habit. However Tony is indebted to the following people and a newcomer who threatens the fragile situation:

As opposed to the slums and poverty-stricken protagonists of IV and The Lost and Damned, The Ballad of Gay Tony focuses on Liberty City's upper-class nightclub culture. However as debts rack up and the collectors come looking for their cut from a debt-ridden club owner, Luis must decide if sticking around with the king of Liberty City's nightlife is a good idea or will it kill him faster than the debauchery of the nightclub life.

It also marks a return to the completely over-the-top missions of the previous games, with the action growing steadily more insane with each mission (in competition with Saints Row and Just Cause). It also marked the final chapter of the GTA IV story (although like The Lost and Damned, it largely takes place at the same time as the main game); the last mission finally ties up what was one of IV's biggest loose ends.

As with The Lost and Damned, you can get it either online through Xbox Live or PSN, or at retail in the Episodes from Liberty City two-pack that includes TLAD. The Steam version was also part of the standalone EFLC pack, but both the vanilla game and the Episodes were combined into one single game as the Complete Edition in 2020.

I keep on tropin':