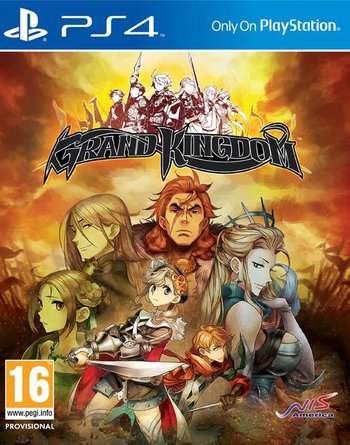 Grand Kingdom is an 2016 RPG for the PS4 and Playstation Vita, developed by Monochrome and published by Spike Chunsoft and NIS America, and is designed to be a Spiritual Successor to Vanillaware's Grand Knights History.

One hundred years ago, the mighty Uldein Empire fell, splitting the world into the four great nations locked in an endless war:

Caught in the middle of these never-ending conflicts, you play as a mercenary captain who has been invited to join The Guild, an organization dedicated to those who have no place to call home, who instead embrace the mercenary way of life. By building your own army of customizable Player Mooks, you can accomplish missions for the Great Nations, wherein you send one of your squads one of your squads to navigate a board-game like world map, occasionally engaging in turn-based battles with monsters and enemy mercenaries alike. You can also sign a contract with one of the nations, which allows you to fight other players' squads in epic PvP "Operations" for glory and prestige. In addition, there's also a single-player campaign that revolves around Uld, a mysterious fifth faction who claim to be the true heirs to the Uldein Empire.

This game contains examples of the following.