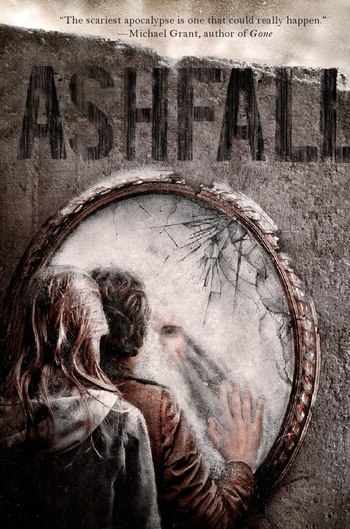 The most terrifying apocalypse is one that can really happen.
Advertisement:

Alex's weekend started out as he liked it: alone in his house to play videogames. Up until something collides with his house, setting it on fire, and the power and phone lines go out at the same time.

And it only gets worse from there.

The Ashfall Trilogy, written by Mike Mullin, chronicles the story of 16 year old Alex Halprin, a survivor in the aftermath of Yellowstone's supervolcanic eruption. After a rather traumatic home invasion experience while staying with his friends, he decides to run away and look for his parents eastward under the ashcloud. He puts on a pair of skis and takes off.

Along the way, he encounters both the best and the worst that humanity has to offer. A few people willing to assist him, others interested in killing him and taking his supplies. He collapses in Mrs Edmund's barn after a run-in with an escaped convict named Target, and her daughter, Darla, later follows him out on his journey to find his parents eastward.

No relation to the South Korean movie of the same name released in 2019 besides their titles coming from volcanic ashfalls.