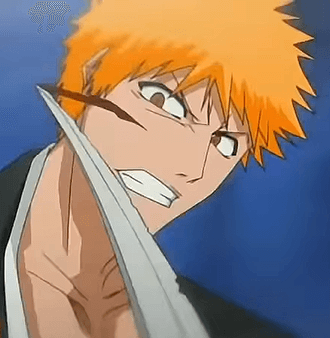 You should see the size of the sword making that cut...
Advertisement:

The act of making a very fine incision upon someone with an attack that cannot even remotely believably do such a thing, usually incorporating elements of Ludicrous Mêlée Accuracy or Improbable Aiming Skills. Though paper cutting is usually just the leading cause for the third item of Standard Bleeding Spots, used to maintain tension in a long battle or uphold realism when Hit Points are in play, it can also effectively drive home a point about the character on either end of the attack:

Paper cutting is done with equal yet ever improbable frequency both with actual bladed weapons such as swords and knives and with bullets and magic projectiles. Never mind what properties have been attributed to the latter and that a bullet passing right by the skin would more likely burn and bruise it than cut it with surgical precision.

It should also be noted that it has recently become fashionable for paper cutting attacks to take some hair with them when aimed at the face.

A subtrope of Could Have Been Messy. Highly pervasive in shonen series, though thanks to the Rule of Cool, it has surfaced in nearly every form of fictional violence. A leading cause of Rugged Scars. Frequently seen with attacks that use Petal Power, Feather Flechettes or a Death Dealer's projectiles. If the combatant actually used paper as the weapon in question, see Paper Master. Compare First Blood.