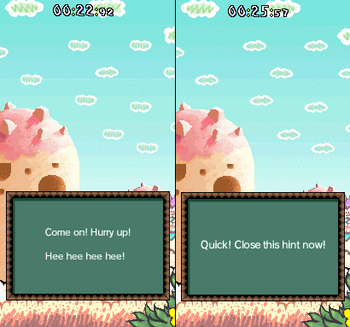 And there's one more important piece of advice for you. So listen up! Time keeps on ticking even as you are reading this message!
— Yoshi's Island DS Time Trial mode message box
Advertisement:

Sometimes a game timer continues going through events that in all fairness should not be affected by it, like cutscenes, an in-game notice, going through the inventory or even saving the game. This is one of those things that averts a common and rather beneficial Acceptable Break from Reality. Sometimes, it's Played for Laughs.

May require you to possess a Bladder of Steel. Not to be confused with San Dimas Time.