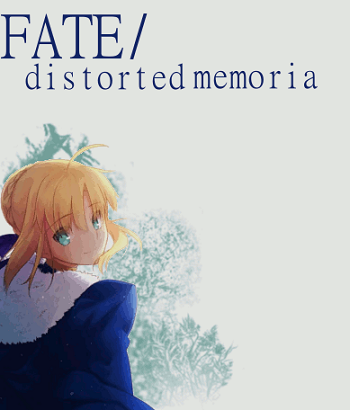 Placeholder. Probably.
From the Site Plot:
"The fifth Holy Grail War ended in yet another failure, a wish was not granted due to the intervention of Emiya Shirou, Tohsaka Rin, and the Saber-class Servant Arturia Pendragon. The Holy Grail was seemingly destroyed, the rogue Servant Gilgamesh killed, and peace was restored to Fuyuki City. Shirou was taken under Rin's wing as a Magus apprentice, and Saber continued to exist despite the war ending through her contract with Rin.
A year and a half of peace passed, and suddenly something changed in Fuyuki. The Greater Grail became active again, and a new Holy Grail War was started. Who did it, the reason why, or how is a mystery; the only thing for sure is that Servants are being summoned again to fight for the Holy Grail. Those who are aware though, know something is terribly wrong:
There's more than seven Servants running around."

In case you hadn't picked up on this yet, the site is an RP based off the Fate Universe, specifically events after the end of F/SN. With a current limit of 14 Servants[15 if you count Arturia] and 14 Masters, but unlimited Magi/Humans in general, the site is currently in the beginning phases of the plot, which for the large part is unknown at the moment. Outside of everyone clobbering each other for the grail, of course.

The site can be found here.

which is mostly used for In-Character shenanigans, discussions, and overall random zaniness, and the OOC-Box

which is usually used for actually reasonable [ish] discussion, questions, introductions, and etc.

A very rough Character Page is up, but it's very much a WIP atm.

Was officially shut down in December 2013.

The IC-Box is known to contain the following tropes: