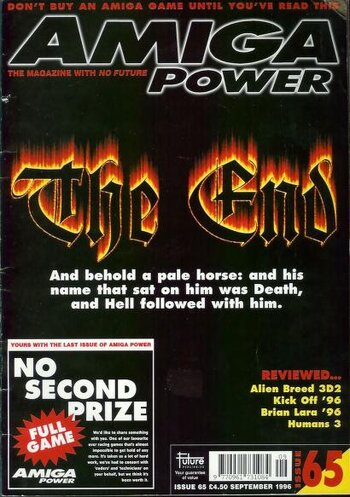 Amiga Power (AP for short) was a monthly British video gaming magazine which ran from 1991 to 1996, covering games released on the Commodore Amiga home computer (and later, the CD32).

Despite being a long-dead and long-obsolete publication from the 16- and 32-bit era of home computing, the magazine still has a fond following decades later, largely thanks to the unique style of videogame journalism that it was known for — an anarchic blend of irreverence, satire, and brutally honest critique, laden with so many running gags, in-jokes, and references that even the magazine's own staff couldn't keep track at times.

Amiga Power made Brutal Honesty a core tenet of its philosophy, a move which frequently brought the magazine to blows with the Amiga gaming industry itself — at the time, print magazines were still the primary source of advice when it came to purchasing video games, and so an Amiga Power review could have a significant impact on game sales. Game publishers didn't appreciate anything less than a good review, and were not afraid to resort to such threats as withholding future games, pulling their advertising, and even legal action in some cases.

The magazine resolutely continued to defy such pressures, however, and often took shots within their pages at those who they considered to be bringing the Amiga gaming industry into disrepute. The core of Amiga Power's outlook was an absolute passion for video games, and they pointed out that if publishers are allowed to get away with producing poor quality games, that would be all anyone would have to play. Being avid gamers, they didn't find this an appealing prospect.

AP would often devote huge features to the pleasures of gaming, the most well known being their yearly APATTOH (Amiga Power All-Time Top One Hundred games), which featured not the most recent, or the most popular releases, but simply the one hundred games that the staff personally loved to play. The list featured a wide mix of not just commercial releases, but even public domain and freeware games, reflecting their opinion that a game's enjoyability was much more important than its heritage.

Other memorable aspects of the magazine included their often bizarre experiments in journalism, usually taking the form of the "concept review" — a game review conducted in an irregular or experimental style, such as Stuart Campbell's protest against censorship (in which he reviewed the mildly violent helicopter game Apocalypse but censored half the review with absurd replacement words), or Cam Winstanley's attempt to turn a review of Turrican 3 into a series of reader-participation puzzles.

The magazine's end came in 1996, around the same time as Amiga itself was pushed aside by the rise of the Windows PC era. Its popularity was such that it had managed to keep going even as the supply of Amiga games began to dwindle, but it was finally put to rest in issue 65, in a memorable issue that killed off most of the staff. Some of the original AP staff moved to its sister publication PC Gamer.

Indicative of Amiga Power's enduring popularity is the fact that, in July 2020, it became the first video games magazine ever to have a tribute album released in its honour. Crowdfunded on Kickstarter in 2019, Amiga Power: The Album With Attitude was an officially-licensed double-CD collection of Amiga game tune remixes, the first disc containing tracks nominated by former members of the AP team, and the second featuring pieces inspired by games and demos that appeared on the magazine's coverdisks. Taking the form of a small hardback book, the physical release also included a 100-page "Mighty Booklet" sandwiched between the discs, containing a variety of facts, features, and anecdotes from the AP crew and the contributing musicians. Further information (including a full tracklist) can be found here

that gives a peek into the inner workings. An archive of its reviews is also available here,

and a full archive of issues can be found here