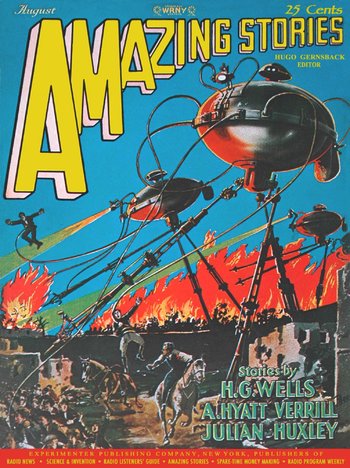 Amazing Stories was the first magazine devoted solely to Science Fiction. It was founded in 1926 by Hugo Gernsback (in whose honor the Hugo Awards are named) and published continuously until 1995. A revival attempt in 1998 was unsuccessful, as was a second in 2004, and the final issue was published in 2005.

Technically speaking, Amazing was not originally a Pulp Magazine, being published in a larger format on slick paper — but it "went pulp" for a few years from 1933 on.

During the 1980s, the title was licensed for a Genre Anthology TV series by Steven Spielberg: Amazing Stories. Unfortunately the magazine didn't capitalize on the TV show's publicity.

Works that debuted in Amazing Stories include: