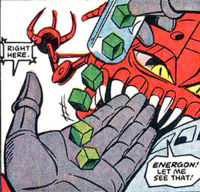 Pocket change or Lunch?
"And when at last it is time for the transition from megacorporation to planetary government, from entrepreneur to emperor, it is then that the true genius of our strategy shall become apparent, for energy is the lifeblood of this society and when the chips are down he who controls the energy supply controls Planet. In former times the energy monopoly was called "The Power Company"; we intend to give this name an entirely new meaning."
— CEO Nwabudike Morgan, The Centauri Monopoly, Sid Meier’s Alpha Centauri
Advertisement:

Some works of science fiction and fantasy have societies or groups that use energy as a monetary unit. This is not about what the Enron Corporation used to do, buying and selling energy; this trope is about cases when the energy or energy source itself is the money. In some cases, an energy crisis is equivalent to an economic recession.

While this has not been Truth in Television yet, it has been seriously proposed in the past, most notably by R. Buckminster Fuller

, as well as by Technocracy, Inc.

during its heyday of the 1930s

This is a sub-trope of Practical Currency. In economics, this would be a form of Commodity Money: it is used as currency but can serve another function.