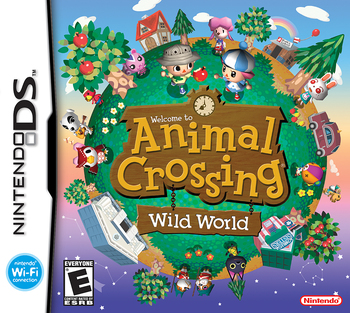 "Your world just got a lot bigger..."
Animal Crossing: Wild World (Oideyo Doubutsu no Mori) is the 2005 sequel to Animal Crossing (2001). Released on the Nintendo DS, it both removes and adds elements compared to its predecessor, introducing a radical revamp of the first game's formula and setting the template that all later installments would follow.
Advertisement:

Wild World removes several features and the playable NES games, in favor of adding online play with friend codes. In order to get around the issue of international online play, most real-world holidays were excised, with a small handful of generic ones offered in their place. The "acre" system was removed and replaced with the "Rolling Log" effect that the series is now known for, with the new visibility of the sky leading to new features such as the ability to shoot down floating presents with a slingshot and the ability to make constellations to view when outside at night. Notoriously, the game also introduced the use of Nintendo Zone DLC, which is the only way to get monkey villagers, making monkey villagers a case of No Export for You for those who live in places where Nintendo did not roll out the service (as well as a case of Permanently Missable Content considering the shut down of the Nintendo Zone service).

On the side of additions, the game introduces a much greater level of customization for the player, allowing them to wear not only shirts, but also different face accessories and hats (having previously been restricted to clothes that would occupy both their shirt and unchanging Nice Hat). The player is also now able to change their hair color and hairstyle through Shampoodle, a salon that becomes unlockable late in the game, and are able to pluck flowers and wear them in their hair or mouths as accessories. The game also makes considerable use of the DS's touch controls, allowing the player to switch between touch controls and traditional button controls on the fly. Similarly to Super Mario 64 DS, the player can use the touch screen as a substitute for an analog stick when controlling their character, but can also use it to organize inventories, write letters, and design patterns.

Perhaps the biggest new feature is the addition of online multiplayer (via the DS's ever-controversial "friend code" system), which became a considerable focus of both the game's marketing and its gameplay — some services are outright exclusive to multiplayer. Due to being one of the system's best-selling games, it helped popularize the DS's online capabilities, alongside Mario Kart DS. Thankfully, for those who either didn't have access to Wi-Fi at the time (given that the technology was still relatively nascent in 2005) or are playing after the 2014 shutdown of Nintendo Wi-Fi Connection, the game still allows for local multiplayer through having two DSes and Wild World game cards in the same room.

An Japan-only animated film based upon this game, Animal Crossing: The Movie, was released in 2006. The Wii's Animal Crossing: City Folk is a amalgamation of the previous two games, with some of the events based on real-life returning from the first game, while still retaining the Rolling Log effect from Wild World.