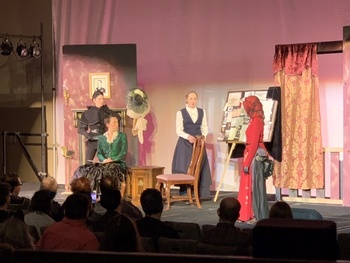 From Mrs. Hawking part V: Mrs. Frost at Arisia 2020. Featuring Cari Keebaugh as Mrs. Hawking, Sara Smith as Clara, Circe Rowan as Mary, and Naomi Ibatsitas as Madam Malaika.
Mrs. Fairmont: But I had heard...something that women whispered of...that when a lady finds herself in a predicament that she cannot resolve alone...there is someone outside the usual workings of society, who can take extraordinary action to help.
— Mrs. Hawkingnote the first in the series
Advertisement:

and Bernie Gabin is the title of the play series, and the first installment thereof

, about a Victorian society widow who secretly acts as an agent of justice for otherwise helpless women in London. A mixture of Batman and Sherlock Holmes, the lead character Victoria Hawking is an intense, brooding figure equal parts covert operative, warrior, and detective. Though a powerful force for good to those who have nowhere else to turn, her rage and bitterness toward men and society in general threaten to consume her. She is balanced, however, by her housemaid and eventual assistant Mary Stone, whose world is widened exponentially when she asks to help with Mrs. Hawking's crusade for justice. Together, these two women strengthen and support one another, even as they clash over their differing outlooks and experiences of the world. Eventually they are joined by Nathaniel Hawking, Mrs. Hawking's gentleman nephew, whose original shock at learning of his aunt's work gives way to a fascination that makes him reevaluate his entire worldview in order to be of help to them.

Currently, there are six completed plays in the series:

There is also one full-length spinoff, Gentlemen Never Tell

The scripts can be read in full on the official website

. The plays have seen several staged readings, while Mrs. Hawking's original performance occurred as part of the programming of the science fiction and fantasy convention Arisia 2015, and each subsequent year has seen the debut of the following installment— Vivat Regina premiered at Arisia 2016, Base Instruments in 2017, Gilded Cages in 2018, Mrs. Frost in 2019, Fallen Women in 2020, and Gentlemen Never Tell in 2021.

The first film project for Mrs. Hawking is currently in post-production, a proof of concept for a television series.

The official website for the series is Mrs. Hawking--Lady's Champion of London

The first play can be seen on Vimeo here

, while the second can be seen here

, and the sixth here