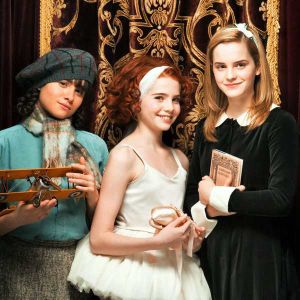 Ballet Shoes is a children's novel by Noel Streatfeild. It is about three Happily Adopted girls living in 1930s England. Together they are being trained in dance and acting, with varying degrees of success. It was made into a movie twice, in 1975 and 2007; the second adaptation was a BBC film starring Emma Watson as the eldest sister Pauline.

The three girls are adopted as infants by a man they call Gum, short for Great Uncle Matthew. They are then left to be raised by Sylvia, their guardian, and Nana, their nursemaid. The family runs a boardinghouse, so the three girls meet many different people who live in the house.

Although only Ballet Shoes has been filmed, the book had several sequels following the girls' further adventures and connections with other young girls involved in performing arts. In America these books were all titled 'something Shoes' for recognition purposes (The Circus Is Coming being retitled Circus Shoes for instance).

Tropes in this work :