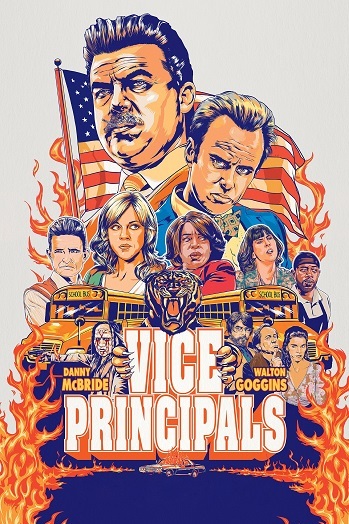 We all need someone to look up to.
"The only thing that matters is who has the power. And the wrong person has the power."
—Lee Russell

Vice Principals is a comedy series that ran for two season on HBO from 2016-2017. It stars Danny McBride and Walton Goggins as co-vice principals vying for the Head Principal position at fictional North Jackson High School in small-town South Carolina.

North Jackson is having a leadership crisis. As its beloved principal retires to take care of his ailing wife, the school's two Vice Principals, Neal Gamby and Lee Russell, are already envisioning life behind the big desk. The only problem is that there's only one chair, and the only thing stronger than their desire to take the school's throne is their long-standing hatred for each other.

Each are convinced they are more deserving and are sure to get the job. Both promise to fire (or otherwise humiliate) the other. But the School Superintendent arrives and presents Dr. Belinda Brown, an educated liberal black woman from Philadelphia, as Head Principal and their new boss. Furthermore, wherever Doctor Brown has served as principal, she has cleaned out the existing administrative staff. Believing their jobs are in jeopardy, the two mortal enemies forge a truce to focus their hate for each other into eliminating Brown by any means necessary before she has a chance to fire both of them.

A trailer can be found here. Get it.

Who put the Trope-po in your ho-ho?