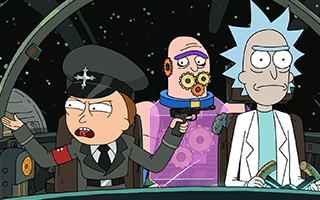 Morty sees a future where he dies old with Jessica and will do anything to make it happen.