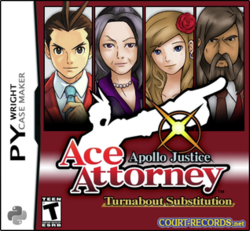 It is notable for being one of the few Ace Attorney games made by fans you can actually play, as the full game (that is, approximately seven hours of gameplay) has been released.

You start out defending the series' lovable old Judge, accused of murdering an infamous serial killer in his prison cell. But as always, things are not as simple as they appear, and the case soon takes an unexpected direction. You'll meet cheerful funeral directors and public figures still stuck in Ancient Greece, decipher hidden messages on mysterious clues, and face a tough-as-nails prosecutor in an epic courtroom battle.

, including a (very much needed) walkthrough and behind-the-scenes information.

An independent sequel, called Turnabout Revolution note Do not mistake it with Case 5 of Phoenix Wright: Ace Attorney – Spirit of Justice, was released as part of the Never Ending Turnabout competition

on Ace Attorney Online, and can be found here

As this is a continuation to Apollo Justice: Ace Attorney and references to the franchise up to that point are made in-game, spoilers for those games will be unmarked. You Have Been Warned.