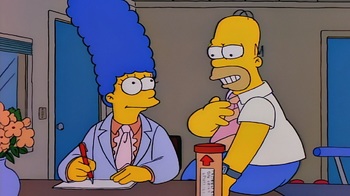 After a nuclear plant worker named Jack Marley is forced into retirement, Marge takes a job at the nuclear plant to help Homer pay for repairs needed to fix their slanty shanty. Meanwhile, Bart fakes sick to get out of taking an English Lit test, but who's going to come to his rescue when a bloodthirsty wolf from The Krusty the Clown Show runs off and heads for the school?