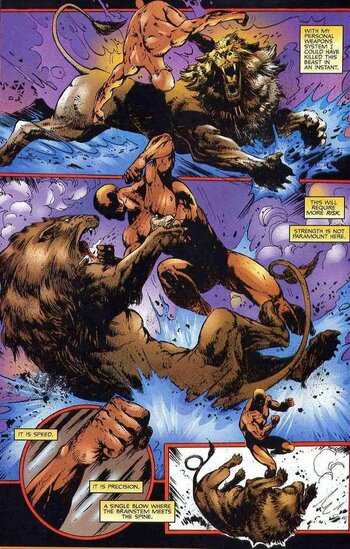 "I have wrastled with an alligator, I done tussled with a whale."
— Muhammad Ali (in his pre-match speech before his fight with George Foreman)
Advertisement:

There are a number of ways to show off a character as a badass; catching bullets with their hands or teeth, walking away from an explosion without flinching, defeating a large number of enemies all at once easily come to mind. But one of the more interesting ways is to have a character engage an animal in melee combat.

In Real Life, engaging an animal in close quarters is incredibly risky, especially unarmed. In fiction, it's Rule of Cool.

The character may use close range weaponry or fight unarmed. Long range weaponry, traps and poisons will not be used as this is a test of strength and skill against a beast of nature. They don't even have to defeat or kill the animal either. Fighting it to a draw or even surviving the experience would be considered impressive enough.

This might be a form of Training from Hell. It may also happen if the character is a Thrill Seeker or it may be them simply acting in self-defense. Often a display of Charles Atlas Superpower but a character with legitimate Super Strength can also qualify.

Contrast Kick the Dog, which may involve a character attacking something much smaller and weaker than themselves. See Hunter of Monsters, Demon Slaying and The Dragonslayer when the creature being fought is a little or more exotic than a regular animal. May result in Nemean Skinning. Compare or contrast Bad People Abuse Animals. Can sometimes overlap with Beastly Bloodsports. The Boxing Kangaroo is a possible opponent the human may face. This trope is also basically The Worf Effect as applied to animals.