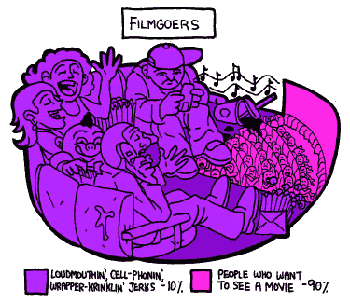 Adjusted to represent viewer perception!
"One bad apple spoils the whole barrel."
— Commonly used idiom when it comes to a person's perception of a group upon seeing its Vocal Minority.
Advertisement:

When it comes to fans of certain things, there are many people who are sane, down-to-earth individuals; individuals who understand that if they talk about a subject and the other person isn't interested, they'll change the subject. These people know how to keep their hobbies under control; how to differentiate between reality and their interests.

Unfortunately, these people aren't news. That's because Weird = Interesting; like any program on television, the news has to be interesting or else people won't watch it. Why talk to an individual who works in an office and occasionally picks up a copy of Spider-Man when you can talk to the 300-pound Basement-Dweller who spent $7,000 on his exact replica of a Scarecrow costume? Or why interview the individual who works at the local electronics store and does fursuiting and furry art as a dedicated side gig when you could interview the man who uses his fursuits for indecent purposes? Or why give airtime to the very normal individual who works for the postal service and leisurely listens to classic rock in his downtime when you could give airtime to the dad with a beer gut who is religiously obsessed with Hair Metal and Arena Rock or the 14-year old who claims to listen to "real music"? Or why interview an educated doctor who watches Professional Wrestling, knows it's staged and enjoys it as the entertainment spectacle it is when you could interview the uneducated toothless redneck who thinks Pro Wrestling Is Real? Or why speak with an individual who lives a normal life and listens to Taylor Swift in their downtime when you could speak with the tween girl who worships Taylor Swift to the point of her room being covered in Taylor Swift merchandise?

The problem is that because only the weirdos get interviewed, this causes non-fans to believe they're all like that (e.g. the ridiculous belief that all comic book fans are clones of the Comic Book Guy from The Simpsons, or all anime & manga fans are weirdos who speak in broken Japanese and sleep with body pillows of their "waifus"). This is also the main reason why people would hate something just because of its fanbase.

This phenomenon, although rooted in stereotypes for fans of Comic Books, extends to other hobbies such as: various sports, a lot of media, some professions, and even certain religious beliefs, ideologies and philosophies that people hold, not to mention loads of stereotypes. Although there can be odd exceptions: compare how your average sports-fan treats a guy with his face painted in team colors versus a guy in a Spock costume.

Sadly, this concept serves very well for Chewbacca Defense. Someone complains about you doing something wrong? Stigmatize them as a Vocal Minority to prove that they are the one who's wrong, make it look like everyone agrees with you, and that complainers are just deluding themselves into thinking otherwise. That's Argumentum ad hominem, but what's more important is that history tends to avert this entirely; i.e. the mere fact that someone complains really hard means something is going very, very wrong. The poem “First they came…”

by Martin Niemöller is all about supporting this point of view. It’s about Nazis. Specifically, it's about how groups unhappy with Hitler's rise to power (like communists or trade unionists) were considered a Vocal Minority, so no one really cared about their persecution and imprisonment. We all know what happens next.

Due to the nature of this trope, many fandom-related tropes are induced solely by this. The only members of a fandom who vocalize their opinion are the ones who feel so strongly about their opinion that they feel the need to vocalize it. The Scrappy, the Ensemble Dark Horse, the Fan Dumb, the Hate Dumb, and Fan-Preferred Couple are all based on what is commented on by the Vocal Minority. So, things like the later seasons of SpongeBob SquarePants sound like the spawn of Satan when described by people on the internet, but usually have a much more positive description via Word of Mouth. In other words, asking someone on the internet about the two will often get long-winded, spiteful rants, while asking a guy on the street will often get much more praise. So, infamous characters like Scrappy-Doo and Wesley Crusher could've very well been fairly well-liked by the silent majority. This is a major reason why Pandering to the Base can be so problematic; even if the other pitfalls are discounted, the writers may only be serving a small but vocal minority.

Still, a creator can sometimes benefit from paying attention to vocal minorities. Just because they're a minority, doesn't mean they're a small group: in large fandoms, the minority could number in the thousands. While blindly kowtowing to any fan's protests or demands is often a stupid and harmful idea, there are plenty of times where fans may actually be onto something, even if it isn't phrased in the most polite or reasonable manner.

This trope can occur in multiplayer internet games of nearly all types. One example would be an MMORPG in which most people can see that a given class or ability is overpowered compared to others, sometimes to the degree of being a Game-Breaker. If the creators try to remedy the imbalance, the most dedicated players (many of whom have been using the imbalance) may dominate online fora and insist that the changes are highly unfair. On occasion, the players will be polled on the topic, and if that happens, it's not unusual for those who object to be found to be no more than a Vocal Minority.

A Broken Base rises when two groups of Vocal Minority members have opposing opinions, then get into an argument about it. Contrast with Silent Majority. Also see Stop Being Stereotypical.