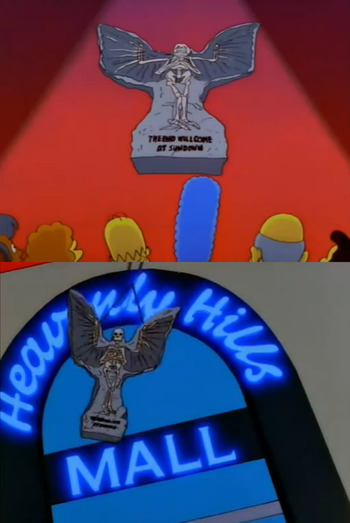 "Prepare for the end ... the end of high prices!"
Advertisement:

When it comes to selling more products, fictional (also real) businesses are always looking for ways to promote themselves. One common route is to set up a scenario, usually one that seems plausible in the fictional world, and tie it into an in-universe product, service, or business. The goal of the stunt usually isn't immediately apparent to in-universe observers, but more Genre Savvy characters will see right through it.

From the villains, maybe you'll have a Corrupt Corporate Executive who is willing to put other people in jeopardy for the sake of making more sales on a product offering relief. Or maybe there's a business which wants to exploit the heroes' crime-busting or villain fighting abilities to attract attention. Given to other characters, it could be a wacky business promotion stunt or part of Viral Marketing, or maybe it's just an average nobody looking for attention.

These are all too common in real life. However, keep in mind that just because a company does a crazy stunt to promote their product, let's say by drinking Red Bull while skydiving, doesn't mean it fits this trope.

In an ironic twist, it is possible for the stunt itself to overshadow what it is promoting thanks to the media, resulting in Misaimed Fandom.

General spoiler warning for some of the examples below as this can be a way to create a Red Herring, or even a Twist Ending.