Film / A Fool There Was 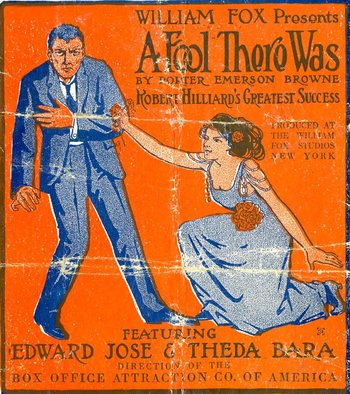 "Kiss me, my Fool!"
Advertisement:

A Fool There Was is a 1915 silent film directed by Frank Powell, starring Theda Bara and Edward José. José is John Schuyler, a wealthy businessman who has an ideal family with his loving wife and super-cute little daughter. Unfortunately for him, he runs across "The Vampire", played by Bara, who has exhausted her last victim and is looking for fresh meat. The Vampire reads in the paper that Schuyler has gotten a special diplomatic posting to the UK. She books passage on the same ship, arranges a Meet Cute, seduces Schuyler, and proceeds to completely ruin his life.

The film takes its title from a poem called "The Vampire" by Rudyard Kipling, and uses quotes from the poem throughout the movie. Although The Vamp as a concept is Older Than Dirt, this movie was responsible for taking the word "vampire", soon shortened to "vamp", and popularizing it as a word for a sexually predatory, manipulative woman.

A Fool There Was was the Star-Making Role for Theda Bara, who would soon become very famous for portraying vamps like she does here. Bara, in fact, is regarded as the first sex symbol in the history of motion pictures. This is also one of only a few Theda Bara films to survive, since most of her film career was lost forever in a 1937 studio fire that burned up all the negatives.