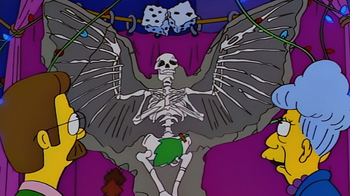 When construction for a new mall threatens an area where a bunch of fossils were found, Lisa manages to convince Principal Skinner to schedule a school archaeological dig to find missing fossils. The field trip seems to have been futile, until Lisa finds a statue of a man with wings, which everyone in town believes is an angel — one with an apocalyptic message.