Film / Catch Us If You Can 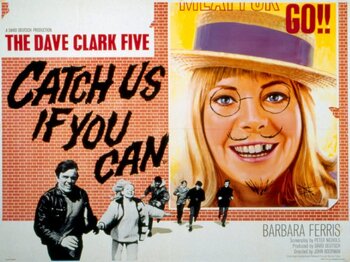 Catch Us If You Can, released in America as Having a Wild Weekend, is a movie starring the Dave Clark 5, written by Peter Nichols and directed by John Boorman.
Advertisement:

Steve (Dave Clark) and his roommates Denis, Mike, Rick, and Lenny work as stuntmen in London. While filming a commercial for a Meat for Go campaign, Steve absconds on a whim with model Dinah (Barbara Ferris). The two travel towards Burgh Island, which Dinah is thinking about buying.

Catch Us If You Can contains examples of:

Alternative Title(s): Having A Wild Weekend