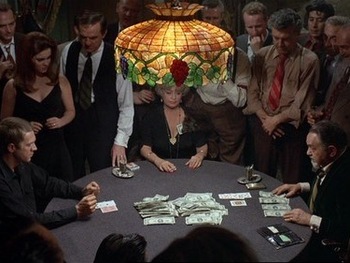 Eric Stoner, aka the Cincinnati Kid (McQueen), is a hot young poker player in 1930s New Orleans. When a much older master of poker, Lancey "The Man" Howard (Robinson), arrives in town, the Kid wants to play him.

In his personal life, the Kid is dating a pretty blonde farm girl, Christian (Weld), but has obvious sexual tension with his friend Shooter's vixenish wife Melba (Ann-Margret). Shooter (Malden), for his part, is $12,000 in debt to William Slade (Torn), who hates Howard. Slade strong-arms Shooter into cheating on behalf of the Kid at the climactic poker game.

A description of tropes appearing in The Cincinnati Kid: