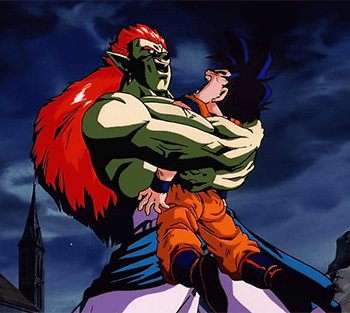 Our hero is in an all-out brawl against a gang of Mooks. Fists are flying and he's knocking the little guys away. Then the Giant Mook appears, wrapping his arms around the hero, lifting him off the ground and... hugging him? Then you hear a Sickening "Crunch!".

This is the Killer Bear Hug, when a sufficiently strong character wraps their arms around someone's midsection and squeezes to try and crush them to death in a dark parody of a Bear Hug. What makes this different from a painful hug caused by someone who Does Not Know His Own Strength is that the pain is intentional and just happens to look like a hug on a surface level.

Subtrope of Bear Hug. Not necessarily given by a killer bear. Compare Deadly Hug, where the hug is more of a distraction for the killing tool (like a gun or knife) while here the hug itself is the weapon. If a Killer Bear Hug is accidental, that is a case of And Call Him "George"!.