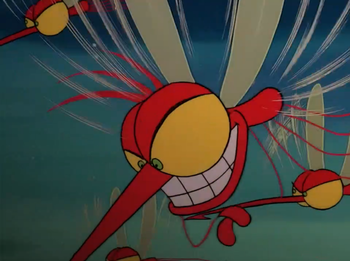 Mosquitoes. They ruin your picnics, disrupt your naps, and suck your blood. Although they measure less than an inch long at most, they kill more people than any other animal, up to 700,000 a year. They're responsible for the spread of diseases including, but not limited to, malaria, yellow fever, Chikungunya, West Nile virus, dengue fever, filariasis, and the Zika virus, and statistically, they basically caused the most deaths to humans by animals (even more than snakes). Expect to hear them long before you see them and the characters to run away in a hand swatting panic when they swarm on them; some might be covered in a plethora of bites when it's all over. Even if the situation isn't dire, expect someone to be immensely bothered by the tiny terrors. Typically found in nasty swamps or the rainforest. It doesn't matter if they are actually called Non Malicious Monsters, as far as their victims, that is everyone, is concerned they are still miscreants.

In real life, only the female mosquito sucks blood, and even then, only when she's going to lay eggs; the rest of the time she's a pollen feeder. If a male mosquito bites someone, it's a case of Insect Gender-Bender.

Compare Macabre Moth Motif and Moth Menace, which give the "bad insect" treatment to moths, Flies Equals Evil for the mosquitoes' equally unpleasant relatives, and Bloodsucking Bats and Vampiric Draining, for other bloodsucking creatures in fiction.