The Game Come to Life 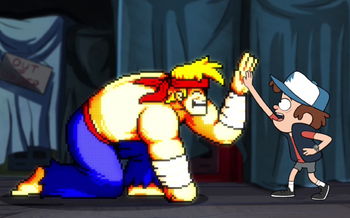 "Ow! Your pixels are really sharp!"
"It doesn't even matter if there is no hope
As the madness of the system grows
In the database database
Just living in the database."
— Log Horizon's Opening Theme

This trope, featured in stories which feature game-playing as an important element, occurs when the game the characters are playing becomes real. Either elements of the game start manifesting in reality, or the characters are drawn into the game. Winning the game is often the only way to escape, or to undo the changes the game caused. The Game Come to Life is usually a Board Game, a Collectible Card Game or a Video Game.

A variation on this trope involves children playing a video game which turns out to be a remote-control system for actual combat machines.

Compare The Game Plays You, when the game not only makes things real but is also sentient and hostile.