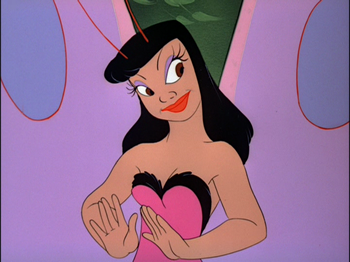 If you remember this short, she's probably the main reason.
Springtime for Pluto is a 1944 Disney cartoon starring Pluto the Pup.
Advertisement:

The Spirit of Springtime brings spring with him as he frolics about, waking Pluto to the joys of the season of life. Pluto wanders through the forest admiring songbirds and mimicking jumping lambs before landing into some brush and scaring a family of quails. As one of the quail chicks flees from him, Pluto mimics it as well by running after it in a caricaturizing fashion. The quail stops as it hears deep singing coming from an underground burrow, which reveals itself to be a caterpillar singing in a high-pitched falsetto. The quail attempts to eat the caterpillar, but the aid that Pluto offers the quail ultimately does more harm than good as it ends up causing the quail to get stuck in the burrow. The caterpillar kicks the quail out of the burrow and offscreen then digs another tunnel out behind Pluto where she proceeds to climb up Pluto's tail and the deep voice starts singing again. When the caterpillar reaches the tip of Pluto's tail, she lassos a silk strand to the end of the tail, jumps off, and rapidly spins herself into a cocoon. Pluto shakes the cocoon out of curiosity before it starts moving as the caterpillar emerges, but now as a humanoid, female butterfly. Pluto is enthralled by her beauty as she proceeds to entertain him with some sexy dancing, which inspires him to mimic her. In her dancing, she had used a water droplet as a ball, so Pluto finds instead a beehive. The bees get angry and attack Pluto, forcing him into a patch of poison ivy. As he scratches himself, he lands in a patch of goldenrods and starts sneezing. Then it starts to rain, and then to hail, followed by a lightning storm, causing the terrified Pluto to run back to his now dilapidated doghouse. When the Spirit of Spring comes by again, Pluto, in a vengeful rage, chases him down, thus ending the short.

Has nothing to do with Springtime for Hitler.