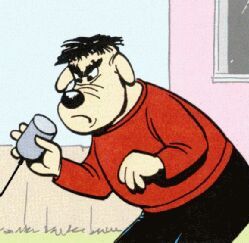 Dogfaces, or dognoses, are nearly human dogs that populate the Disney Ducks Comic Universe, Mickey Mouse Comic Universe, DuckTales (1987) (and 2017), Goof Troop, A Goofy Movie, An Extremely Goofy Movie and some of the Classic Disney Shorts. One even shows up in the Quack Pack episode "All Hands on Duck". Goofy is considered to be a dogface as well. Similar character designs have been used by other cartoon studios as well, though Disney is largely the Trope Codifier.

This trope is very prominent in the works of Carl Barks, who initially wanted to draw humans for the Donald Duck comics, but Disney insisted on keeping humans out. Barks compromised by adding pig or dog noses to the human designs he drew, though occasionally he did manage to sneak in actual humans. Don Rosa followed Barks's lead, though he would sometimes drop the "dog snout/ears" element, making them basically humans with black noses.

Related, but slightly less common are similar human designs with minimal animal features added. The second most common tends to be people with pig-noses/ears, but others may show up such as bird people with "feather feet complete with toes" or cat eared people.

Even though they are most prominent in the Disney universe, dogfaces/dognoses are not exclusive to Disney. In fact they are ostensibly Older Than Dirt since the concept of cynocephali

has been documented in many ancient civilisations from ancient Greeks to Inuit.

Tropes that apply to Disney Dogfaces:

Tropes that apply to non-Disney Dogfaces: