Music / Cruising with Ruben & the Jets 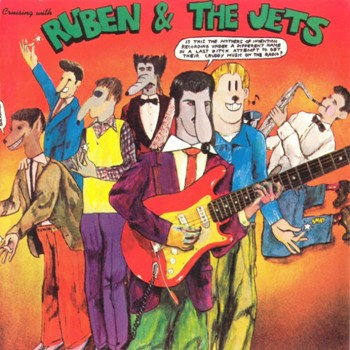 Is this the Mothers of Invention recording under a different name in a last ditch attempt to get their cruddy music on the radio?
Advertisement:

Cruising with Ruben & the Jets is a 1968 album by Frank Zappa, in which he and the Mothers of Invention play under the monicker of the Fake Band Ruben & The Jets. The entire album is a nostalgic Homage/Affectionate Parody to 1950s Doo-wop, of whom Zappa was a fan.

At the time Cruising with Ruben & the Jets was considered to be a remarkable departure from Zappa's trademark style. There was no political Satire, no sudden experimental changes, no combination of different musical styles, and no bawdy comedy. For Zappa's already small fanbase this was a huge Audience-Alienating Premise. Especially since many hippie youngsters considered Doo-wop to be completely unhip and passé. As a result many Zappa fans were initially perplexed and disappointed, a reaction this album can still conjure today. Especially with later generations who, unfamiliar with doowop, may think Zappa is overdoing it with all the high pitched silly voices and greasy arrangements. However, it has been Vindicated by History as a very enjoyable easy-listening experience and very accessible compared to many of his other albums.

In a case of Life Imitates Art/ The Red Stapler a man named Rubén Guevara started a group named Ruben & The Jets in the 1970s. Their debut album was aptly titled For Real! (1973) and produced by Frank Zappa too! He even performed the guitar solo during Dedicated To The One I Love and Mothers of Invention band member, Jim "Motorhead" Sherwood played baritone sax. Despite that the songs on that album were all new compositions.

Unfortunately, when releasing Cruising With Ruben & The Jets on CD in the 1980s Zappa replaced the bass and drum tracks with a New Wavesound, which completely destroys the authentic doo-wop sound he mimicked in the 1960s. For a long time this butchered The Not-Remix was the only available version of this album on CD, which made collectors search for the original vinyl version instead. In 2010 the original album was finally released as it was intended, be it under a different name and album cover: Greasy Love Songs. The UMe remasters of Zappa's catalogue, released in 2012, used the 80s remixed version of this album.

Alternative Title(s): Cruisin With Ruben And The Jets