Music / We're Only in It for the Money 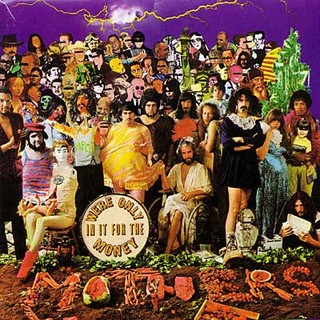 "Flower power sucks!"
"Unbind your mind
There is no time
Bo-i-i-i-i-n-g
To lick your stamps
And paste them in
Discorporate
And we'll begin
Freedom! Freedom!
Kindly loving
You'll be absolutely free
ONLY IF YOU WANT TO BE"
— "Absolutely Free"
Advertisement:

We're Only in It for the Money (recorded in 1967, released in 1968) is an album by The Mothers of Invention, and one of Frank Zappa's most famous and popular concept albums. A scathing attack on such 1960s topics as the flower power movement, police brutality, The Beatles, Psychedelic Rock, the generation gap and the growing mass commercialization of pop music. In 2005, it was among the records selected by the National Recording Registry as "culturally, historically, and aesthetically important".

Apart from this the album also has several instrumental musique concrete tracks and songs containing inside jokes about Zappa's band and friends. According to the liner notes the listener should read the story In the Penal Colony by Franz Kafka first, before listening to the final track "The Chrome Plated Megaphone of Destiny".

When the album went into production, it originally had a different concept and direction. In fact, the entirety of Money, Cruising with Ruben & the Jets, the dialogue sessions from the reissue of Lumpy Gravy, and parts of Uncle Meat were recorded at the same New York sessions. The Beatles' Sgt. Pepper's Lonely Hearts Club Band album came out while the Mothers of Invention were recording the album, and Zappa decided to change the album's concept to parody that album because he felt that in the context of late 60s America (widespread rioting, The Vietnam War) the Beatles' emphasis on "love" was dangerously naive. The cover is particularly memorable for offering the Ur-Example of the Sgt. Pepper's Shout-Out.

The album is the Trope Namer for Only in It for the Money.

"The Trope-Plated Megaphone of Destiny":