Music / Between the Buttons 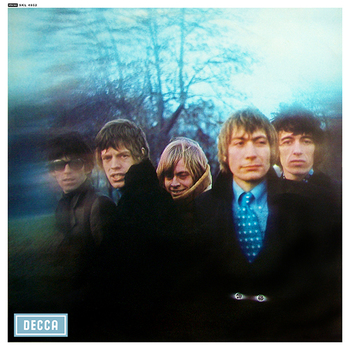 "We could have fun just groovin' around!"
"The American release — I don't like the English version so much because it contains a totally different set of tunes. I understand that they don't like the album very much but I thought that it was an important piece of social comment at the time. I remember seeing Brian Jones very drunk in the Speakeasy one night and telling him I like it and thought it superior to Sergeant Pepper ... whereupon he belched discreetly and turned around."
—Frank Zappa naming Between the Buttons his third favourite album of all time in "Faves, Raves and Composers in their Graves", Let It Rock magazine, June 1975.
Advertisement:

Between the Buttons is the fifth studio album (seventh American album) by The Rolling Stones, released in 1967. It is the second of three Stones albums that dabbled in psychedelia, coming after Aftermath (Album) from 1966, and before Their Satanic Majesties Request from the same year. It is best remembered for the hits "Let's Spend the Night Together" (later covered by David Bowie on Aladdin Sane from 1973) and "Ruby Tuesday", which were both nevertheless only featured on the American version.

Who's Been Troping Here?: