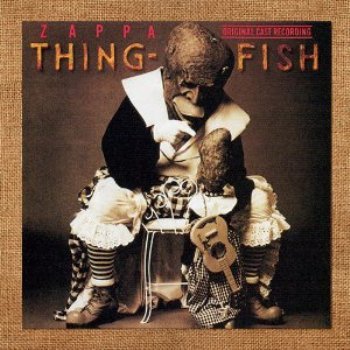 Thing-Fish is a Rock Opera concept album by Frank Zappa, released in 1984.

A right-wing aristocratic theater critic creates a disease to wipe out gay and black people and tests them on prisoners led by the titular character Thing-Fish; they are mutated into potato-headed, duck-mouthed creatures called "Mammy Nuns". The resulting disease is interpreted by many as a "punishment of God", which helps Moral Guardians climb up the government's ranks. Meanwhile, the Mammy Nuns put on a Broadway musical which is attended by Harry and Rhonda, a White Anglo-Saxon Protestant couple that Thing-Fish eventually holds captive. The musical causes the pair to confront their pasts, which results in Harry coming out as gay and Rhonda (who is a blow-up doll brought to life) having sex with a briefcase out of sexual frustration.

Of all of Zappa's albums from The '80s, Thing-Fish is generally considered his absolute worst. The plotline, as described above, is so far-fetched and pointless that the general message is ultimately lost and difficult to take seriously. Most of the comedy comes from Ike Willis' vocals as Thing-Fish, doing an impression of George "Kingfish" Stevens from the 1951-1953 sitcom Amos 'n' Andy.note Originally a 1928-1960 radio show, Amos 'n' Andy was a minstrel sitcom with three protagonists: the naïve but honest Amos; the arrogant, but lazy and gullible Andy; and the conniving Kingfish, all of whom were portrayed by white actors speaking in stereotypical dialects. Amos 'n' Andy has not been shown in American TV since The '60s due to its extremely dated anti-black overtones and has rarely been shown outside the United States, so the joke was completely lost on most audiences.

Musically, Thing-Fish is Zappa at his least inspired. Most of the album is cobbled together from instrumental tracks recycled from past Zappa songs, and some are completely recycled earlier songs with new lyrics to fit whatever story the album has, sung by Ike Willis in his obnoxious Kingfish impression. The only stand-out track is the comedy novelty song "He's So Gay", which was often played at Zappa concerts.

Despite its Broken Base and many fans not acknowledging its existence, Zappa often called Thing-Fish "one of his most essential albums because of its political message." Some very forgiving Zappa fans still like it as an underappreciated satirical masterpiece.