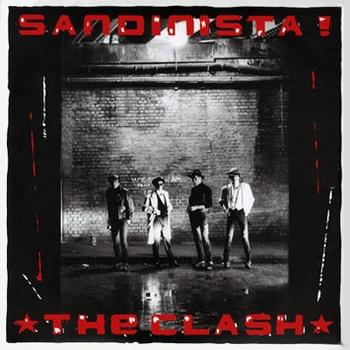 Sandinista! is the fourth studio album by English Post-Punk band The Clash, released in 1980. A huge departure from the group's original sound, the record took the approach of London Calling and escalated it tenfold, spanning a whopping three LPs and experimenting in a variety of styles and genres influenced by Black culture. In particular, the opening track, "The Magnificent Seven", served as the Trope Maker for Rap Rock alongside Blondie's "Rapture" that same year, blending the band's reggae-punk mix with the sound and style of the growing Hip-Hop movement.

Having already engaged in some fierce Loophole Abuse to get London Calling released as a double album and at a sharp discount, the band asked their label, CBS Records, to sell their triple LP for the price of only one. Once again, the label protested, but ultimately made good on the Clash's wishes. However, they only did so after the band agreed to an equally dramatic reduction in royalties, forfeiting all money made from the first 200,000 copies sold and surrendering 50% of royalties for all later sales of the album. This situation would ultimately motivate the more commercially-inclined direction of the band's next album, Combat Rock.

Sandinista! was supported by three singles: "The Call Up", "Hitsville U.K.", and "The Magnificent Seven". Another track from the sessions, "Bankrobber", would see release as a non-album single during the promotional cycle for Sandinista!; among the people attending the recording of this song were Ian Brown and Pete Garner, who would go on to become two of the five founding members of The Stone Roses.

Note: Most CD releases are across two discs; CD one contains sides 1-3, while CD two contains sides 4-6. A 2004 Japanese mini-LP CD reissue and the 2013 deluxe edition, meanwhile, package the album as a three-disc set, with each CD corresponding to one of the three records in the original vinyl release.