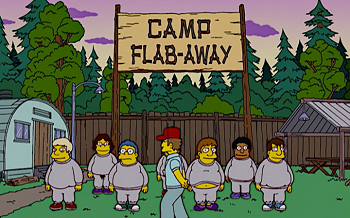 Mr. Prince: We'll see you when you get back from image enhancement camp.
Martin Prince: Spare me your euphemisms! It's fat camp, for Daddy's chubby little secret!
Mr. Prince: You promised you wouldn't make a scene.
— The Simpsons episode 4.1 "Kamp Krusty"
Advertisement:

A summer camp where overweight and obese children are sent to lose weight. Of course, the children's parents are oblivious to what actually goes on in fat camp: Drill Sergeant Nasties are everywhere, pushing the kids to their limit. The children constantly have to run up hills and the food is scarce if not so unpalatable that the kids outright refuse to eat it and often try cheating with candy and junk food. Treatment is so bad that the kids will eventually plan a Great Escape, in which the camp counselors will use the same methods that prison guards use to recapture escapees.

This is not true of real fat camps, of course, which always use positive reinforcement, and attempt to teach the children healthy eating habits, instead of starving them. Thanks to Political Correctness they are now called Fitness Camps or Weight Loss Camps, and now also allow teens and adults to attend.

Some of the stereotypes of fat camp are Truth in Television, however. Especially the running up the hill part.