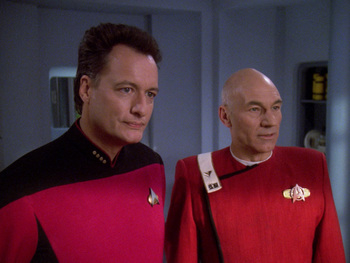 "You said you regretted a great many things in your life. Well, here's a chance to change some of them."
Advertisement:

An Away Team being beamed directly into Sickbay with a critically wounded Picard. Picard has been shot by an energy beam that has caused his artificial heart to malfunction. Doctor Crusher attempts to Technobabble it into working again. As she works, everything fades to white, and Picard starts to Go into the Light until he finds Q at the end of it, who promptly announces that he's dead.

Q explains that he is God, which Picard rejects. Q conjures his overbearing father to berate Jean-Luc for joining Starfleet, and the voices of all the people who have died under his command join in. Q asks if he wants to beg forgiveness, but Picard refuses to play along. Q asks if Picard can really say he has no regrets? He has one: the artificial heart. A real heart would not have malfunctioned. We then see how he got it, as described to Wesley in "Samaritan Snare": Getting into a fight with three Nausicaans, getting stabbed in the heart, and laughing as he lay dying.

Picard admits that he was a Hot-Blooded jerk back then and wishes he could have changed it. Suddenly he is slapped by a woman. He realises he is alive, in a Star Trek II-era uniform and being sarcastically applauded by his old academy friends, Marta and Corey, only they don't look so old. After they leave, Q appears and explains he's given Picard a chance to Set Right What Once Went Wrong. Picard refuses to become a Butterfly of Doom, but Q solemnly assures him that no one will be harmed by any changes he makes to his own life.

The seems to satisfy Picard, who admits to the curious Q why he was slapped: He scheduled two dates at the same time. We see him at the other date, but with the older and more cautious Picard isn't interested in a quick fling and accidentally insults his date, resulting in a drink in the face. His friend Corey is showing off at a pool-like game called dom-jot. One of the Nausicaans who would later start the fight challenges him to a game, and apparently wins due to cheating. Originally Picard helped Corey rig the table to even the odds, but knowing this would lead to the fight, Picard now advises against it when Corey brings it up. This unexpected mature response impresses Marta, but before it can go anywhere, Q walks in with flowers for "John Luck Pickherd".

Q tells Picard that Corey is rigging the table anyway, so Picard goes to Corey and threatens to report him if he doesn't stop. Corey is aghast at Picard's sudden stodgyness, but Marta is even more impressed and after a night of passion, Picard turns over in bed to say "Good Morning" to Marta, only to find Q there, Marta having slipped away. Picard locates Marta and discovers that she deeply regrets the encounter, believing that they're Better as Friends. Q points out that Picard has insulted or alienated everyone he's interacted with so far.

Picard shares an awkward drink with Corey and Marta, but the Nausicaans come in and taunt them for being cowards. Corey stands up to fight, but Picard shoves him away, letting the Nausicaans cackle and walk away without a fight. Corey is outraged and severs his friendship with Picard. Even Marta is now upset by his boring prudence. But on the bright side, Q tells Picard he succeeded at saving his life. Hurray!

Picard finds himself back on the Enterprise, but he's a Junior Lieutenant in Astrophysics. He learns that his career has been safe and unexceptional. He has never showed any ambition or the ability to take risks, so he's effectively stuck in a dead-end job. In private, Picard insists that this boring, unexceptional man is not who he is. But Q explains that trying to fix his impulsive youth makes Picard this man.

Q: Au contraire. He is the person you wanted to be — one who was less arrogant and undisciplined in his youth; one who was less like me. The Jean-Luc Picard you wanted to be, the one who did not fight the Nausicaan, had quite a different career from the one you remember. That Picard never had a brush with death; never came face-to-face with his own mortality; never realised how fragile life is, or how important each moment must be. So his life never came into focus; he drifted through much of his career, with no plan or agenda, going from one assignment to the next, never seizing the opportunities that presented themselves. He never led the away team on Milika III to save the ambassador, or take charge of the Stargazer's bridge when its captain was killed, and no one ever offered him a command. He learned to play it safe. And he never — ever — got noticed by anyone.

Picard now admits he was wrong and asks Q to let him put things back the way they were before — again. Q says "Before, you died in Sick Bay. Is that you want?" Picard responds by saying "I would rather die as the man I was, than live the life I just saw". So Q sends him back, he starts the fight and gets stabbed in the heart for his troubles, and as he knows his life is back on track, he now knows why he laughed. He laughs still in Sick Bay, his artificial heart stabilizing.

After recovering, Picard confides his experience with Riker, wondering if it was just a Near-Death Experience, a Vision Quest by Q to give him deeper insights into himself, or maybe both? Picard wonders with Riker whether it was All Just a Dream, or maybe Q has undergone Character Development of his own.

Picard: There are many parts of my youth that I am not proud of. There were ... loose threads ... untidy parts of me I would like to remove. But I when I pulled on one of those threads, it unraveled the tapestry of my life.

Riker is amused at the idea of a Hot-Blooded Picard, so he starts telling Riker about an earlier encounter with Nausicaans as the Enterprise flies away.

Tapestry includes the following Tropes not mentioned in the synopsis: