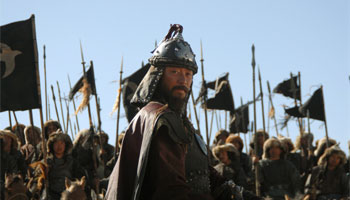 Badass.
Mongols need laws. I will make them obey... even if I have to kill half of them. Our laws will be simple. Don’t kill women or children. Don’t forget your debts. Fight enemies to the end. And never betray your khan.
Advertisement:

Mongol is a 2007 film Biopic about Genghis Khan. The film traces the early part of the life of Temudgin, the man who became Genghis Khan, starting with his selection of future wife Borte when he was nine years old. The film follows Temudgin through his father Esugei's murder, the usurpation by Targutei (another member of Temudgin's clan), Temudgin's friendship and then rivalry with Jamukha (leader of another clan), his defeat by Jamukha, his return and triumph, and Temudgin's eventual unification of the various Mongol tribes.

Mongol was directed by Sergei Bodrov, and was a joint Russian/Kazakh/German production. The film was shot in Inner Mongolia and the dialogue is in the Mongolian language. It is a considerably better film than previous Genghis Khan biopics such as the disastrous The Conqueror (1956, with John Wayne as Temudgin!) and Genghis Khan (1965), as well as being more historically accurate, though it takes its share of major artistic license.