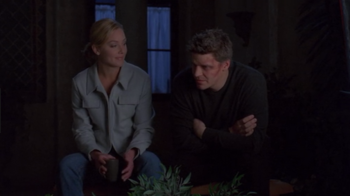 Angel pulls on some clothes and struggles to the balcony, falling to his knees in pain as Darla watches on, waiting for him to become Angelus. She thinks his struggle is the bitterness of his soul leaving him. She tells him that she had come there to kill him, but she felt him surrender to her so completely that there was no need. But then Angel tells her that she saved him, and thanks her, and apologizes for not being able to save her; Darla realizes that he still has his soul. Darla can't accept that she failed to rid him of his soul, with the implicit realization that sex with her does not mean true happiness for Angel. Instead, surrendering to Darla symbolized Angel's perfect despair, and this has reawakened the good in him and making him realize his recent mistakes. Darla's words to Angel remind him of Kate's desperate phone message and he quickly orders Darla to leave, saying the next time they meet, he will kill her.

Angel rushes to Kate's apartment and finds her unconscious from her drug and alcohol overdose. He manages to revive her, but she is not grateful and orders him to leave.

Lindsey returns to his apartment to find Darla, telling her that after her recent power play the firm's security have orders to stake her on sight. He then notices Darla has possession of the now powerless Band of Blacknil and demands to know where she got it. Darla tells him it was 'payment'. Upon realizing that Angel and Darla had sex, he demands all of the details from her.

Angel shows up at Caritas after hours and wakes the Host for advice. Angel regrets his recent actions, with the Host telling him that sometimes one needs to hit rock bottom before they can see how far they've fallen. Angel admits he doesn't know how to go back to the way things were before, but the Host tells Angel there's no going back; instead he needs to use the moment of clarity he experienced to help him move on in his life and find a new place in the world. The Host also assures Angel that the lawyers in the wine cellar were always going to die with or without his help, although the Powers That Be would likely have preferred it to happen without. Angel wonders what the Powers want him to do next only to be reminded that he fired his connection to them. Angel realizes he may never be able to earn his friends' forgiveness only to be told that may not be a problem as, the way things are going, they will be lucky to live through the night. Cordelia arrives at the Sharp home and finds all of the family dead. She receives a vision about a demon attacking her, only to have it actually occur moments later.

Cordelia realizes that the demons have an eye on the back of their heads and they want all of her friends destroyed in retaliation for destroying the spawn they had implanted in Stephanie Sharp. Wesley hears noises in his apartment and just before one of the Skilosh demons attacks, Angel arrives, but can't enter since Wesley has never invited him inside before. Wesley refuses at first, until two Skilosh demons attack. Angel is quickly invited in, and the two are able to kill them and share a brief moment of camaraderie before the walls go back up again. Angel explains the reason for his return is to help his friends.

As the two travel to the office hoping to find Cordelia (Angel having already checked her house), Wesley tells everything he knows about the demons, their reproduction through human hosts, and the destruction of the demon in Stephanie and Angel notes that they kept the name Angel Investigations although Wesley assures him it's going to be changed. The two make their way to the office, but there is no sign of Cordelia. Angel jokingly says that, knowing Cordelia, she's out partying with friends, but Wesley castigates Angel for not noticing the changes in Cordelia over the past months, since she began having visions. Unlike Angel, she could not ignore the visions, and has turned into a serious young woman who has dedicated herself to helping others. Angel is left very ashamed of himself and this deepens his resolve to save her and make amends.

The Skilosh demons are upset about losing two more of their kind so they use Cordelia as bait to bring hosts for more, and they implant their spawn in Cordelia. Wesley lectures Angel about how little he knows about his friends or about helping people. Gunn shows up at the office, and is angry to find Angel there. Angel notes the bond that has developed between Wesley and Gunn and, after some detective work, the three head to the Sharp's to save Cordelia. After being attacked while driving, Angel leaves the car for Gunn and Wesley and stops to take care of the demons. As Angel's about to start fighting with demons, however, Lindsey arrives in a pickup truck and repeatedly runs Angel down. Lindsey gets out and starts beating Angel with a sledgehammer, all the time demanding to know what happened with Darla. Angel turns the tables on Lindsey and starts hitting him, all the while apologising for everything (including that Darla will never love him, and that he didn't try hard enough to save him when Lindsey came to him for help). Angel finishes by smashing his prosthetic hand with the sledgehammer and stealing his truck to rescue Cordelia and the others, but not before telling Lindsey that it could have been the other hand if not for the epiphany.

Gunn and Wesley try to sneak into the Sharp home but are caught. Angel crashes Lindsey's truck through the house, kills the demons and rescues his friends however Cordelia is not ready to forgive him. Lindsey returns home to find that Angel has returned his truck, but that Darla has disappeared..

Angel talks with Kate about his existential epiphany; he has realized that if there is no greater meaning, no plan or no great cosmic force and it is all ultimately futile, then the only thing that exists is each other, and the smallest act of human kindness is everything. Angel admits that recently he's been fighting for his redemption or to score points off lawyers, but now he's choosing to help people simply because he doesn't believe they should suffer the way they do. Kate marvels at his epiphany, and reveals that's she come to her own conclusion: she believes there is a higher power watching out for them, and she has come to this knowledge because she realizes that she never invited Angel into her home yet he was still able to enter to save her. Kate is now at peace and has accepted that her future will not be with the police.

Angel returns to the Angel Investigations office and apologizes to his friends. They tell him they are not ready to go back and work for him. But he says he doesn't want that; he wants to work for them to earn their trust back. Everyone's doubts are put on hold when Cordelia has a vision, and the reunited team sets out to help the helpless.