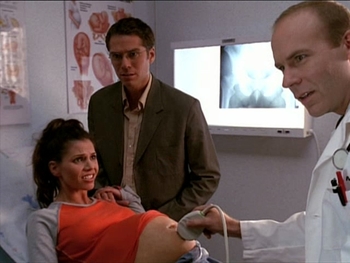 Cordelia gets ready to go out for the evening while Angel tries to decipher her so-called filing system (she filed Mrs. Bensen under F because she was from France). Transparently seeking company, Wesley comes back to the office just before Cordelia's gorgeous gal pals, Serena and Emily, make a stunning entrance. The two young women intend to take Cordelia to club La Brea to meet the famous photographer, Wilson Christopher, whom she has apparently been seeing for some time. As Angel takes Cordelia aside to ask her why she hasn't introduced him to the person she's dating, she suddenly gets a vision that knocks her to the floor behind the desk. To cover Cordelia's distress, Angel and Wesley distract Serena and Emily so awkwardly the girls can only conclude they are a couple. Meanwhile, Cordelia forces herself to stand, gives Angel the necessary information about the evil thing he's supposed to fight, then departs with her friends. After a slight mishap concerning the address of their quest, Angel and Wesley manage to locate and slay the demon, encountering a degree of difficulty that makes them grateful to face it just hatching from its egg, rather than fully grown. Commenting in prim Watcherly fashion on Cordelia's lack of clerical reliability, Wesley also makes a disparaging remark about the "doxies" she has for friends. He changes his tune in mid-phrase when Angel teases, "I think they liked you." Talking girls, the two demon hunters make their companionable way back home.

At La Brea, Cordelia and Wilson talk, seeming to make a genuine connection. Wilson takes Cordelia home, where, after a tender but brief kiss in the doorway, she invites him to come in. Phantom Dennis registers his extreme displeasure by brightening the lights she dims, and putting on a "jaunty polka" rather than the mellow music she selects. Wilson doesn't seem to mind though, as he follows Cordelia into the kitchen to find her in the midst of taking Dennis to task under cover of making tea. Wilson stills Cordelia's chatter, and she responds passionately to his gentle kiss, then gives herself over to his slow, tender lovemaking. She wakes the next morning to an empty bed, but not an empty womb. Cordelia is beyond horrified to find she has grown—in a matter of hours—very, very pregnant. Concerned by her unprecedented absence, and unable to reach her by phone for several hours, Angel and Wesley go to Cordelia's apartment. Too worried for finesse, Angel breaks in and Wesley follows. They find Cordelia still huddled under the covers, rocking and staring in shock. Both men are aghast at her physical and mental state, but Angel tries to remain calm as Cordelia tearfully tells him she's ready to wake up now. At his gentle urging, she recounts everything that happened the night before, recalling nothing unusual or out of the ordinary, and Angel promises to figure things out. After discovering that the phone number Wilson gave to Cordelia is no longer in service, Angel instructs Wesley to take her for an ultrasound to see exactly what it is they are dealing with, while he goes to hunt down "daddy."

Starting his search at La Brea, Angel gains the bartender's reluctant trust and obtains information about Cordelia's friend Serena, who turns out to be the ringleader of a group of attractive young women hooking up with Wilson's group of well-heeled guys. When he gets to her apartment, Angel cautiously enters, calling Serena's name. She answers, saying, in reference to the dimness relieved only by candles, that the light hurts her eyes. Agreeing that he knows the feeling, Angel halts near the far end of the room. Back turned in borderline hostility, she tells Angel she thought he was the liquor store's delivery service. When Serena faces about to show him the almost-empty fifth clutched in her fist, Angel sees she is just as enormously pregnant as Cordelia. Meanwhile, in the clinic exam room, the doctor and his assistant disapprove of the way "Mr. and Mrs. Pangborn" seem to have been caring for Cordelia's condition for the past eight and a half months. Reading the ultrasound in shock, Dr. Wasserman counts seven heartbeats and, trying to conceal his agitation under a professional demeanor, orders the nurse to prep for amniocentesis. Accepting the full syringe after the doctor has withdrawn fluid from Cordelia's hugely swollen abdomen, the nurse shrieks and drops the disintegrating instrument to smash on the floor. Behaving like an extraordinarily powerful acid, the spilled amniotic fluid rapidly eats a hole right through the tile, then through the sub-flooring beneath. Excusing themselves with reflexive politeness, Dr. Wasserman and the nurse flee in terror, which shocks Wesley. He suggests that they go find Angel, and Cordelia starts questioning Wesley about what's inside of her. However, she isn't worried about the abnormality of it — she's worried that they might be unhealthy. At Serena's, Angel sits with her, asking questions that could give him some clue to Wilson's current whereabouts. When he asks whether there is anyone he can call for her, Serena shakes her head and explains that Wilson and a few others are careful to select girls who have no family and few friends in the city. Just as it occurs to her to tell Angel that the money the guys use smells, Serena suddenly doubles over with pain. Returning to Angel's, Wesley and Cordelia are exiting the elevator when she also doubles over with a sharp groan. Wesley leads her to Angel's bed and tries to makes her as comfortable as possible. Fading in and out of coherence, Cordelia asks what Wesley saw when he looked over the doctor's shoulder at the ultrasound monitor. When he begins to tells her, however, she already seems to know. Looking straight in his eyes for a moment, Cordelia announces that Wesley is scared of what's inside of her. Then her gaze loses focus and her voice grows distant as she tells him she can sense the babies trying to communicate with her.

After he helps Cordelia lie back on the pillows and covers her so she can try to rest, Wesley turns to find Angel silently observing from the doorway. Moving into the next room, Wesley reports on what happened at the clinic, showing Angel the printout from the ultrasound. Grabbing the Yellow Pages, Angel tells Wes that Serena believes the guys hang out at a cigar and gun club, but she doesn't know its name or location. As they walk past the kitchen, they see Cordelia standing in front of the open fridge drinking pig's blood directly from one of the quart containers Angel has stashed there. Wiping her mouth with the back of her hand, Cordelia ignores the blood spilled down the front of her overalls, remarks, "I was hungry," to the guys watching in fascinated disgust, and pads silently back to bed. Finding Wilson down on the shooting range at his gun club, Angel takes away his gun and confronts him about Cordelia. Discovering by scent that Wilson is not a demon himself, Angel roughly demands to know the identity and whereabouts of Wilson's demon lord. When the rest of the guys show up, Wilson gets to his feet and, accepting another loaded gun from one of his friends, promptly shoots Angel three times in the gut. To his shock, Angel doesn't fall, but vamps out instead and says, "I really don't like it when people shoot me." Taking the other guys out one by one, Angel finally forces Wilson to talk. Wesley, in the meantime, discovers that Cordelia carries the spawn of a Haxil demon. When he shows her its picture and tries to comfort her, however, Cordelia bashes Wesley unconscious with the heavy reference book. Under the demon's telepathic thrall, she fiercely protects its young.

The sound of Angel's phone ringing brings Wesley groggily back to consciousness. He answers and it is Angel, calling from a phone booth while manually extracting the bullets from his own torso. Frantic, Wesley tells Angel that Cordelia has left, but Angel says he knows where she's going. Comparing notes, the two men determine that the spawn can't survive if the psychic umbilical the Haxil maintains with each of the hosts is severed. Listening to Wesley's catalog of the Haxil beast's many strengths and few weaknesses, Angel suddenly has an idea and asks Wes if he can shoot straight. Meanwhile, Cordelia and several other pregnant women gather at an old refinery fronting the entrance to the cave where the demon resides. Dressing each other in flowing white gowns, the women slowly climb into a waist-deep pool of odoriferous liquid and stand in a circle, waiting. Wesley arrives and, reverting to Watcher mode, tries to scold Cordelia and the others out of the pool, but is interrupted by the thunderous appearance of the gigantic Haxil demon emerging from its lair. Sentient and English-speaking, the towering Haxil is about to remove Wesley and begin delivering its spawn when Angel cockily appears, rolling a huge white tank, his gift for "the baby shower," down the ramp in front of him. Hefting the tank, Angel whirls and launches it at the Haxil, who reflexively catches it. Before the Haxil can react to the liquid nitrogen label now visible, Wesley shoots a hole in the tank. The tank falls and sprays the escaping vapor over the demon, freezing it solid. With the psychic link broken, the women in the pool cry out in pain as the spawn they have been carrying suddenly evacuate their wombs. Cordelia climbs out, grabs a block and tackle from its anchor, and swings the heavy missile directly at the frozen Haxil, shattering it to coldly smoking smithereens.

Two days later, Cordelia returns to the office, looking svelte and fabulous once more. She teases the boys mercilessly, then surprises and touches them both by growing sincere, letting them know how grateful she is to have two people she trusts with her life.