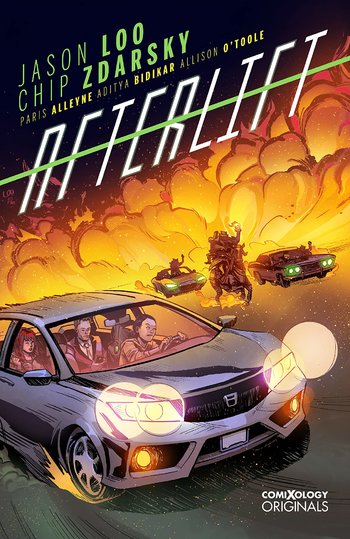 Afterlift is a 2020 digital comic book by Chip Zdarsky and Jason Loo, originally published online by Comixology Originals and then in a physical edition by Dark Horse Comics.

Janice Chen is a driver for a variety of ride-share apps, so when she gets a new passenger named Dumu, she thinks she knows exactly where to go. That is, until he picks up someone else, who turns out to be the recently deceased soul of a woman named Suzanna, and the place he needs her to go is Purgatory, where Suzanna will cross over into the afterlife. You see, in order to pick up a soul, you need a still living person to drive — it used to be horse and chariot, but now, well, Dumu is moving with the times.

Except a fresh soul in Purgatory means blood in the water and more demons are after them to capture Suzanna. Yes, more — because Dumu isn't really an angel and the afterlife he's taking Suzanna isn't heaven.

And now Janice Chen is in for a hell of a ride.