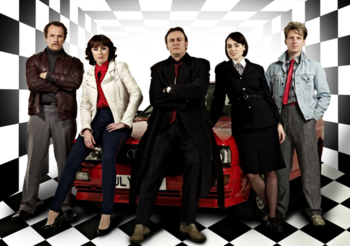 Fire up the Quattro!
L-R: DS Ray Carling, DI Alex Drake, DCI Gene Hunt, WPC Shaz Granger, DC Chris Skelton
"My name is Alex Drake. I've just been shot, and that bullet has taken me back to 1981. I could be one second away from life... or one second away from death. All I know is that I have to keep fighting. Fight to live. Fight to see my daughter. Fight to get home."
Advertisement:

Detective Inspector (DI) Alex Drake (played by Keeley Hawes) is a police psychologist living in the year 2007. She was the officer responsible for debriefing Life on Mars protagonist Sam Tyler after he awoke from a prolonged coma, and has become fascinated with the mystery of his vivid accounts of living in the year 1973.

One day, Alex becomes involved in a hostage situation with a stranger who somehow knows both her and her parents. She is suddenly shot, and finds herself waking up in the same world that Sam Tyler inhabited, only now it's the year 1981 and in London instead of Manchester. Alex is initially convinced that her 1981 is a subconscious mental construct pieced together from her sessions with Sam, but there are inconsistencies with Sam's account, certain facts which Alex should have no way of knowing, and she's being stalked by the clown from David Bowie's "Ashes to Ashes" music video. Not to mention the presence of one DCI Gene Hunt.

When the events of this world start to intertwine with Alex's memories of the real world, she begins to wonder just what the nature of her new reality is, and if it would be possible for her to change history itself.