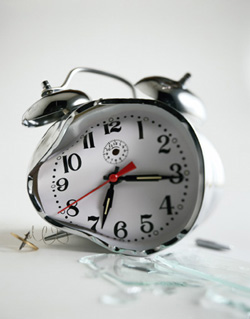 I wonder when that happened?

A useful method of telling when a certain disaster/event happened is that all of the clocks have stopped at the same time. This can also happen to individual time pieces that have been damaged. May be a cause of Clock Discrepancy.

Stopped clocks are, surprisingly, often correct. Twice a day, in fact. For a related trope, see Dumbass Has a Point.

See also Race Against the Clock, Right on the Tick, and 24-Hour Trope Clock.