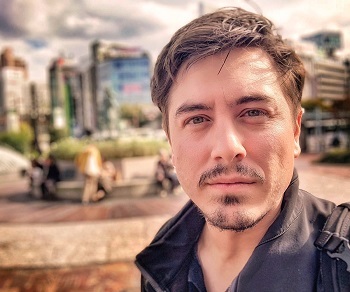 is a Youtube channel with a focus on semi-professional travel documentaries hosted by Chris Broad. Originally travelling to Japan after applying to the JETnote Japan Exchange and Teaching program as an English teacher, Chris nowadays focusses on videos documenting his experiences throughout Japan, or giving travel tips to people thinking of visiting Japan, all wrapped up in occasional dry British wit and occasional antics of his two eccentric Japanese friends, Ryotaro and Natsuki. Aside from those two, he also collaborates with other Youtubers, both Japanese and International, and travels with them to different Japanese tourists spots while setting up challenges sent by his subscribers. Most notable among these would be The Anime Man, who is a recurring guest in several of his "Journey Across Japan" travel vlog series of videos.
Advertisement:

Alongside his youtube videos, Chris also co-hosts a similarly-named podcast

alongside London radio DJ Pete Donaldson. Thanks in part to his popularity on Chris' videos, Ryotaro has also created his own, dedicated Youtube channel

, which Chris himself occasionally recommends to his viewers.

Abroad in Japan contains examples of: