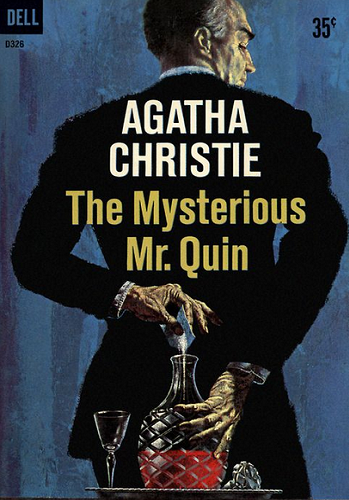 Mr Quin and Mr Satterthwaite are the central characters of a series of mystery stories by Agatha Christie, most of which were collected in The Mysterious Mr Quin in 1930.
Advertisement:

It is frequently hinted that Mr Quin may be supernatural in some respect; his sudden appearances and disappearances, his exquisite timing, and the frequent impression that he knows more than he's letting on, suggest it without ever providing solid evidence. There's also a recurring thing where a trick of the light will momentarily make him appearing to be wearing brightly-coloured motley, or a trick of shadow will make him appear to be wearing a mask; these, along with his name, connect him to the magical central character of the harlequinade

Christie was using a symbol that was better known in her time than now, which is why Mr Quin always shows up just when tragedy in the form of murder or suicide is about to strike—especially when it's about to strike lovers. The harlequin in the Commedia dell'Arte is both likable and romantic. But in other tales, the harlequin is more sinister—a trickster who makes his own rules and who may bring chaos or death. Quin combines the two images, as he's both a likable romantic and someone who quite enjoys throwing a spanner named Mr Satterthwaite into the works now and then. And judging by the frequency with which Quin knows when someone is dying or about to die, it's very likely that he's either an agent of death or is Death itself. Christie's words support that; in her autobiography

, Agatha Christie listed the Harley Quin stories as her favorites and describes Harley Quin as "a friend of lovers and connected with death." Christie dedicated The Mysterious Mr Quin to "Harlequin the invisible"—which doesn't make much sense if she was talking about a character noted for his sudden and unexplained appearances, but does make sense if she was referring to an entity by a different name.

Quin and Satterthwaite appear together in two stories that were not collected in The Mysterious Mr Quin. "At the Crossroads", the fifth story in original magazine publication order, was omitted from the collection; it's one of the weaker series entries, and Christie had already scavenged bits of it for the novel The Murder at the Vicarage. (It eventually made it into one of the miscellaneous Christie collections under the title "The Love Detectives".) "The Harlequin Tea Set" was written years later to round off the series. In the interval between The Mysterious Mr Quin and "The Harlequin Tea Set", Mr Satterthwaite made two appearances with Hercule Poirot, a cameo in "Dead Man's Mirror" and a full team-up in Three Act Tragedy.

The omnibus The Complete Quin & Satterthwaite, Love Detectives collects all the stories in which Quin or Satterthwaite appear.

The 1928 movie The Passing of Mr Quin, the first film adaptation of any of Agatha Christie's works, is loosely based on the first Quin and Satterthwaite story, but leaves out Satterthwaite entirely and retains Mr Quin In Name Only. Three Act Tragedy has been adapted several times, always without Satterthwaite.