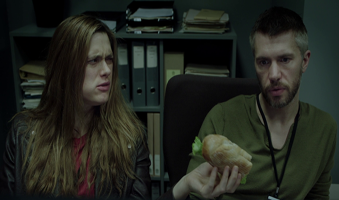 So I'm superstitious, but you don't eat bread because there's evil spirit Gluten in it?
"Don't go to sleep tonight, robbers! Here come Detective Motherless and her squires! We'll grab the city by the balls and bring evil to its knees!"
— Urd, after deciding that a police siren isn't good enough
Advertisement:

Beforeigners is a Norwegian series that explores the ramifications of time holes that periodically deposit people from the past into the present day. Created by Anne Bjørnstad and Eilif Skodvin and premiering on HBO Nordic on 2019 August 21, the first season ran six episodes, and in 2020 it was confirmed to be renewed for a second season, which aired on December 2021 with another six episodes. It is currently available in international markets on HBO Max with English subtitles.

For two decades now, the time holes have deposited "timeigrants" from the Stone Age, the Viking Age, and the 19th century into the present day. The time holes are said to be a global phenomenon, but the series focuses exclusively on the city of Oslo. The series is also a Police Procedural, focusing on veteran police detective Lars Haaland as he is paired with rookie cop Alfhildr Enginnsdottir, Oslo's first police officer of "a multi-temporal background" to investigate the murder of a supposed Prehistorian woman, which in turn leads them deep down the rabbit hole.