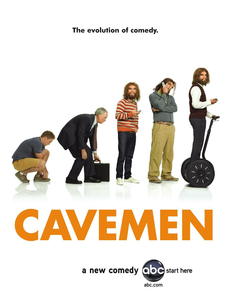 So easy, a... well, you know.
Advertisement:

In 2002, GEICO unveiled its new ad campaign characters: cavemen. GEICO's slogan was "It's so easy, a caveman could do it!", which would immediately offend a caveman who was just walking by. Becoming incredibly popular, a few years later, ABC decided that it was enough to warrant a half-hour sitcom.

The series, like the ad campaign it was based on, centers on three cavemen who live in a modern apartment, as cavemen were integrated into Homo sapiens as a separate sub-group.

It was cancelled after only six episodes.

Tropes from the series included: