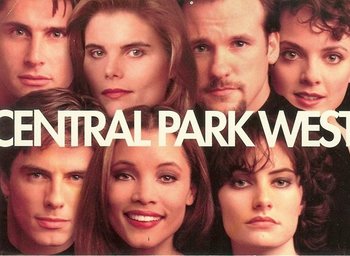 Central Park West (also known as CPW) was an American prime time television soap opera that ran from September 1995 to June 1996 on CBS, and was set in the affluent Central Park West area of Manhattan, New York.

The series centered around the Fairchild siblings (played by Madchen Amick and John Barrowman), the stepchildren of the wealthy editor of the trendy New York-based fashion magazine Communique. Carrie Fairchild (Amick) works as a columnist at Communique, while Peter Fairchild (Barrowman) works as a high-powered attorney. As the series begins, editor Stephanie Wells (Muriel Hemingway) takes control of the magazine while coming into conflict with Carrie. The group becomes immersed in a world of backstabbing socialites, sex, drama and intrigue while working to further their own careers and ambitions.

CPW had the misfortune of being greenlit right after one of CBS' worst television seasons ever: 1994-95, after Fox acquired partial rights to broadcast NFL games. Many local affiliate stations departed to Fox because of this move; the shifts left CBS with programming that primarily attracted an older audience. Central Park West was part of CBS's attempt to rebrand itself and appeal to younger viewers. However, despite a huge marketing push - it was the most promoted new show in years - and an attempt to portray the show as the Spiritual Successor to 80's soap operas like Dallas, Dynasty and Knots Landing, the ratings didn't climb.

The show was removed from CBS' schedule and brought back a few months later, heavily retooled and missing half the cast (Hemingway left by this point, and Raquel Welch was brought in). The retooling was not enough to save the show, which was canceled soon thereafter. The failure of the series quickly returned the network back to their traditional broadcasting focus.

Interestingly, CPW challenged the normal conventions of prime time soap operas of the decade. While most other soaps had long-running storylines, CPW had multiple fast-paced (and short) storylines running concurrently that could be dropped within a moment's notice. The show was also notable for being filmed entirely in the downtown NYC area (even in winter), a trait that hasn't been seen in many other productions since then.