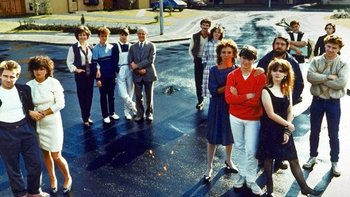 Now no longer in production, although available via the Internet, Brookside is a British soap opera set in Liverpool, England.

In the Stone Age when Britain only had three television channels and the launch of a fourth was a matter of national celebration, the series began on the launch night of Channel 4 on November 2, 1982 as one of its flagship programmes. It ran for 21 years until 4 November 2003. Its major innovation in terms of production is the use of real houses wired up for TV equipment rather than studio sets.

Originally intended to be called Meadowcroft, the series was produced by Mersey Television and it was originated by Phil Redmond. His other TV successes included the gritty kid's drama set in a sink London comprehensive school Grange Hill, and Channel Four's successor soap to Brookside, Hollyoaks.

Brookside was very successful for some time and is notable for its tackling of realistic and socially challenging storylines, as seen in the lives of a disparate group of people residing in a suburban cul-de-sac named Brookside Close. It was at its most popular in the 1980's and the early 1990's.

From the mid-1990's it began raising more controversial subjects under the guidance of new producers such as Mal Young and Paul Marquess. It is especially well-known for broadcasting the first pre-watershed lesbian kiss on British television, as well as a powerful domestic abuse storyline resulting in murder.

The series caused an uproar from its fist night - conservative newspapers such as the Daily Mail denounced it for its use of demotic language and Liverpool street slang, citing this as evidence of the coarsening of British TV and the pernicious left-wing influences that were dragging this once-great nation down. The show featured a storyline about a consensual incestuous sexual relationship between two sibling characters during 1996. Brookside was also the first British soap to feature an openly gay character when (Gordon Collins) came out in 1985 (some years before EastEnders did the same), and it was also a pioneer in that it showed the results of serious drug addiction with a number of different characters.

The show also depicted mental illness in a character whose life had been blighted by the ruin of Liverpool under the Conservative government of the early eighties, and did not shy away from attributing Liverpool's decline and mass unemployment to deliberate government policy, another thing which endeared the show to the rabidly Thatcherite Daily Mail. (The show did come from a genuinely left-wing social perspective, and as such was not an example of unbiased TV, much to the disgust of perfectly unbiased British newspapers).

Although the series had a long and successful run, by 2000 its viewing figures were in terminal decline and low ratings eventually led to its cancellation in July 2003. The final episode was broadcast on 4 November 2003 and was watched by around 2 million viewers.